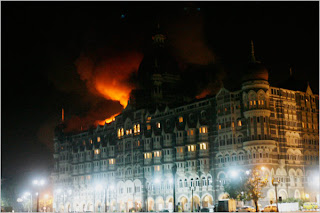 ic copyright: Getty Images
There was a piquant, or perhaps unbelievable, moment around 8.30 on thursday morning: flames were destroying the heritage wing of the Taj Mahal hotel, shots were being heard, chaos mingled with shock on the streets outside and a spokesman for the government in Mumbai told CNN that the "situation is under control". Yes, this might be considered under control if you are Somalia.

In most cities of South Asia, hidden under the grime and neglect of poverty, there is a little Somalia waiting to burst out and infect the body politic. This nether world, patrolled and nourished by criminals who operate what is known as the "black economy", has bred, in Mumbai, a community that has contempt for the state since it knows that its survival depends on corruption. Organised crime requires both sophisticated management capability and the culpability of law enforcement agencies. It does not live in isolation; it has international links through smuggling routes. Once the principal commodity of this trade was gold; today it is drugs. Since it has neither patriotism nor morality, it is easily lured into partnership with terrorists, particularly when it has reason to feel aggrieved. A good section of Mumbai's underworld consists of Muslims who entered because this space because they were denied a place in the "white economy". During the last five decades they have developed strong vested interests. They live in a different zone from the rest of India's Muslims, who are largely impoverished.

Details about the Mumbai outrage are still unfolding. But we do know that at least 30 men armed with AK47s and grenades held India's premier city hostage, targeting both Indians and foreigners, particularly Americans and the British. When facts are uncertain, theories become ascendant. Since at least some of the terrorists entered the city by sea - in a trawler registered in Vietnam - it is possible that this operation was propelled from Karachi in Pakistan through the Lashkar e Tauba, a terrorist organisation sustained by hatred towards secular India and funded by shadowy Pakistani agencies and street support. At the moment of writing, one terrorist has been caught alive and interrogation will, hopefully, reveal details we can trust.

The drama of events, however, could make us miss a significant element of the story. This operation must have taken months of planning: weapons were deployed, a small army was mobilised, targets studied, routes finalised, transport organised, weak points identified; a multiple plan of attack involving hundreds at the very least was put in motion, and the massive infrastructure of government discovered nothing. The chief of the Anti Terrorist Squad, Hemant Karkare (who lost his life in the battles that raged through the night) recieved a death threat from the nearby city of Pune and his own unit did not bother since it was busy playing games on behalf of its political masters. Terrorists may have a religion but death has none. In the first list of dead issued by the JJ Hospital, the name next to Karkare was that of Mastan Qureshi. There were six Hindus, four Muslims and two foreigners, presumably Christians, on that list.

Complacence and politics gave the terrorists more protection than silence or camoflauge could.

This represents a collapse of governance; these are the wages of the sins of administrative incompetence and political malfeasance.India is a tough nation. No one should have illusions about that. It has fought off Muslim terrorists in Kashmir, Sikh terrorists in Punjab, Christian terrorists in Nagaland, and Hindu terrorists in Assam and across the country (there is a Maoist insurrection in a broad swathe of states in the centre of India). India has learnt that you cannot blame the whole community for the sins of a few. But under ineffectual governance, particularly in the last three years, a tough country is in danger of degenerating into a soft state. Instead of being the international leader in the worldwide war against terrorism, India is sinking into the despair of a continual victim.

Some three years ago India's Prime Minister Dr Manmohan Singh rather smugly told President George Bush in Delhi that Indian Muslims were not involved in any act of terrorism. The implication was that they constituted a success story, healed by the virtues of democracy, a conclusion that Bush happily repeated. Dr Singh certainly did not fool any terrorists, some of whom may have read his self-congratulation as a challenge.

I am an Indian Muslim and proud to be both. Like any Indian, today I am angry, frustrated and depressed. I am angry at the manic, rabid dogs of war who have invaded the commercial capital and fountainhead of business energy. I am frustrated by the impotence of my governments in Mumbai and Delhi, its ministers tone-deaf to the anguish of my fellow citizens. And I am depressed at the damage being done to the idea of my India.
Posted by M J Akbar at 17:03

Dear Mr. Akbar,
Your anguish is commendable. But sadly Indians have been hearing good english prose from Nehru's time. Could you please give some concrete, creative solutions to the problem? Every Indian keeps blaming the politicians of India. But nobody comes up with an alternative. For eg. why do you not question the fact that Indians are not ready for a parliamentary form of democracy- maybe we need a soft dictatorship of some kind to enforce the rule of law irrespective of religion, caste etc? Or break-up the country for administrative purpose- Let states be mini-countries with foreign affairs, communication and defence alone controlled from Delhi. The problem is that India is ungovernable given its population, diversity of religion,language, culture etc. A radical solution is required. Academics like you must come up with solutions, not poetry.

Forgiveness is far superior
===========================
1) If India becomes a M***** majority country it will not remain a democratic country
2) If Indian M***** men were born in any other M***** country (permanent citizens) they might not adhere to monogamy
3) While in minority status M***** want m****** to be constructed but while in majority, M***** do not permit construction of temples or any other worship place.
4) While in minority status M***** want freedom and secularism but while in majority, M***** ruthlessly crush others.
5) Some M***** talk about with low respect for the society and its people. They behave as though they can migrate to a list of countries which are eagerly awaiting to welcome them.

This is not a trick or design to please or offend anyone.

No society can sustain and survive PEACEFULLY without FREEDOM and justice given to its citizens. It is the bedrock. Though democracy is worst form of governance but it is better than other forms of governance.

A person who saves a living being is far superior than the one who is indifferent . The person who forgives those who sin against him is highly respected and prospers more than the one entrenched in perpetual enmity.

Each one of us should respect and earn the good will of others. Hatred, treachery, perpetual enmity, puritanical supremacy of all forms, bogus slander,
evil intentions & designs, disrespecting women and idle luxury life brings doom to people for sure.

Promote Your Page Too

Tinderbox: The Past and Future of Pakistan by M J Akbar